Real Talk Book Review with “Behind the Beautiful Forevers”: A Hauntingly Real Portrayal of Life in a Mumbai Slum

Read my full review of Beyond the Beautiful Forevers and other exciting books at the one-and-only Goodreads by clicking here!

Nearly two years after purchasing Behind the Beautiful Forevers, I’ve finally finished this almost-always grim and saddening, sometimes breathtaking piece of non-fiction. Why did it take me so long? Certainly not due to sheer length or abstruse prose; with a length of 256 pages and Boo’s precise (yet poignant), journalistic style of writing, one could easily sweep through this book in the span of weekend with a half a day or so to kill. Honestly, despite possessing an enormous interest in slum development and India from the get-go and in spite of a compelling hook (woman set on fire WHOAH) to draw the reader in the from very first line, I couldn’t for the life of me fathom the will to continue on with the book. The characters seemed one-dimensional to me at the time, and I thought Boo was actually doing an injustice in her representation of slum dwellers, making them out to be greedy, foul-mouthed or morally devoid beings with hardly a selfless bone in their bodies.

I suspect that I’m not alone in feeling this way. However, about two days ago, I decided to return to this book after a loooong hiatus, and I’m glad that I did. To other viewers, I would encourage you to plod along until page 100 or so, and reassess whether or not your feelings have changed. The characters in the book by that point cease to be mere tropes of slum dwellers and become complex living beings whose daily lives and tribulations in the slums as garbage pickers fully engage the reader and make them feel almost at home with the slum residents, as if we’re standing right alongside them as an injured beggar dies on the roadside or as a boy makes a daring climb through a factory to snatch a few pieces of German silver to pawn for a few dozen rupees to feed himself. For those who are even slightly familiar with the way ‘justice’ is meted out and rule of law enforced in India, your heads will inevitably shake with disapproval at the corrupt intimidation and extortion of India’s poor at all levels of the system–from Mumbai police stations to government-run hospitals–that is portrayed in Boo’s investigative work. Yet still, the corners of your mouth will turn upward into a slight smile at the attitudes and words that slum residents adopt to deal with their daily struggles and their occasional resistance in the face of all this meaningless corruption. 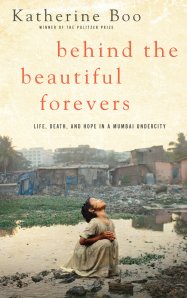 The poignant and haunting cover of Katherine Boo’s “Behind the Beautiful Forevers (image taken from Amazon.com).

Boo’s journalistic background, persistence and dedication to fact-finding and interviewing her host of Annawadi (the slum where the majority of the book’s characters reside) residents again and again is admirable, particularly given her outsider status as a white Western woman. Despite all the obstacles in her path, she clearly utilized all the resources available to her advantage to come up with a work that so successfully narrates the varied, yet similar lives and ambitions of several of Annawadi’s slum dwellers, from the conniving and aspiring slumlord “to-be” Asha to the garbage-picking Muslim boy Abdul, who is hardened to the realities of life, yet becomes inspired to lead a virtuous life after a pivotal lecture, even while his own life is on the line after being fraudulently charged for a grievous crime that he did not commit. Each character, despite his or her many flaws, becomes wholly human and understood through Boo’s work.

And that complete 180 turn-around from the reaction I had at the beginning of the book, which can be summed up as “stereotypical outsider depiction of slum dwellers” to the end when I thought “hot diggity dang, what a complex, fascinating, and surprisingly real portrayal,” is why Boo’s book is well worth the read. In addition, the insight that she sheds on the gargantuan and hot (yet still functioning) mess that is India is eye-opening for those who are newbies to India and and an interesting inward reflection for those who are more intimately familiar with Indian society.