Happy birthday Dad! On July 16, my dad became 57 years young, and we celebrated with a massive office party, where my dad’s BPO Systems staff in Vijayawada had assembled quite the treat.

We came into the office, which was bedecked in blue and pink ribbons and balloons. It was as if someone had set off a party store panda and let it loose in the office. We first sat down for a formal puja (Hindu religious ceremony) to mark the auspicious nature of the day. I’ve observed pujas before, but this is my first time participating in one so extensively outside of our own home, so I do my best to follow the instructions of the pujaree (the priest who is leading the puja) and not screw up. I think I do okay.

Afterwards, we were escorted by dad’s employees (really, his Vijayawada family) to the lounge area of the office, where we treated to two hours of speeches, riotous skits, beautiful classic Indian songs, and oftentimes rip-snorting funny dance numbers, performed to the tune of classic and contemporary Telugu film stars like NTR and Mahesh Babu, as well as to modern-day viral YouTube hits, like ‘Gangnam Style.’ My favorite part might be a skit in which the female staff members play-act as men sitting in a crowded space on a train or bus, and mocking sterotypical boorish male behavior by acting it out. All of this is dedicated to Dad on his special day. I’m overwhelmed by the genuine affection that my dad’s employees display toward him, manifesting in this awesome half-day of rehearsed performances. While there have been ups and downs, I’ve watched his company in Vijayawada grow from three employees to more than 40, and it’s all due to his hard work and vision. I’m so proud of you, Dad! Happy birthday. 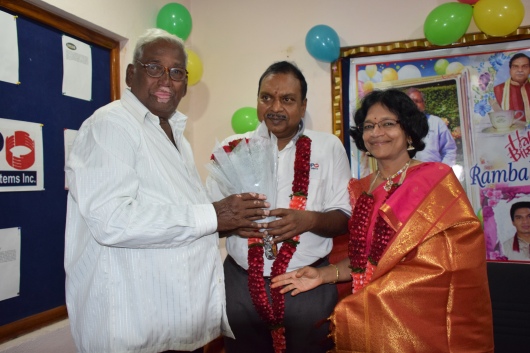 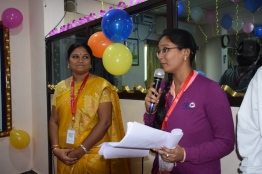 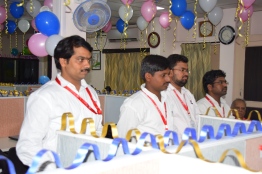 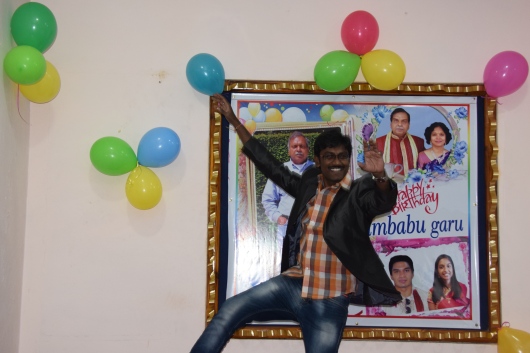 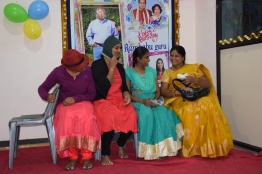 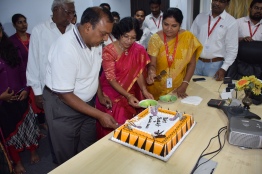 The next day, we rise bright and early again and head off to breakfast at Vija grandma’s house, where we dine on traditional South Indian breakfast fare like idli and oopma with other relatives. After breakfast, we start off on the long journey out of the city and into the towns and villages in the outskirts of Vijayawada.

Our first informal stop is enroute, at a village that is the origin of our branch of the Yarlagadda family. Although our family is originally of the warrior caste, they at some point left those roots behind and picked up new ones as farmers in this area. There’s nothing much, just a few signs labeled with the Yarlagadda name, but it’s still a little exciting to be standing among this site of family history

We then pick up one of Dad’s old school friends and his wife, as they’re accompanying us on this nearly-day long sojourn. On our way to Vija ammama’s house for lunch, we come across another historic Yarlagadda site, and break for a quick stop. It’s pretty cool – a hidden palace surrounded by walls of routine shops. It’s a beautiful, if run-down, house, guarded by some out-of-place looking lion and angel statues. Inside, we see a bust of an Indian ruler from some branch of the Yarlagadda lineage as well as a Yarlagadda family tree of this particular ruling branch (not necessarily ours, but still fascinating nonetheless). These individuals used to rule under this area until the time of British colonialism, and even then, they ruled under the permission of the British crown. And we even spot the most comic green parrot, who sits in place unnervingly still. My mom is convinced that it’s a fake parrot until one of the men who manage the palace waves a stick at the bird, and it flies away. 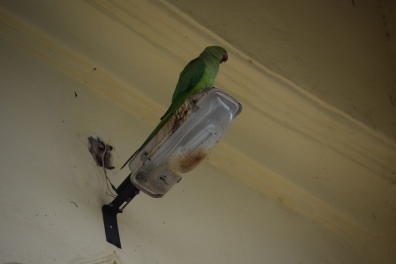 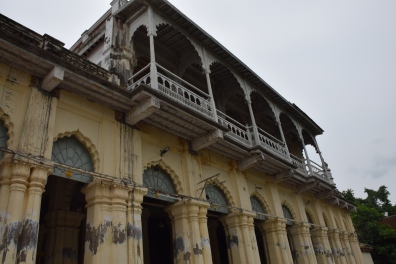 We finally make it to Vija ammama’s house, where a delicious lunch buffet awaits us. But first we take in the beautiful greenery, replete with coconut and banana trees around their house. I, somehow, manage to be stung by a dozen mosquitoes in two minutes, while my mom and dad emerge unscathed. Boohoo.

Afterwards, it’s at least another two hours – complete with horrifically bumpy roads, which I stave off by summarily falling asleep – to our original destination at the outset of all this: Hamsila Devi. It’s the place where the Krishna River meets the sea, and many consider it to be an auspicious place. The beach is surprisingly empty, free of both trash and tourists (for the most part). It’s not as hot today as it was yesterday, and the air is cooler by the beach, making for a refreshing stop. We pose for photos on the beach, and then hire an auto-rickshaw (a type of Indian vehicle akin to an open air taxi) driver/photographer we find on the beach to drive a few kilometers down the beach to actual site where the river meets the sea. Never before have I seen an auto-rickshaw, or any kind of vehicle, for that matter, on a public beach. It’s almost comical.

Once we get to the beach, we get to get to be models for a minute and pose for a series of photos while frolicking in the water. I never thought I’d see my mom risk soaking her nice saree for a few hours of fun on the beach, but I’ve been proven wrong! Some police officers arrive (there’s a small station of sorts at the end of the beachhead) and start yelling at us intelligibly. We later learn that they’re worried about us wading too far into the water, or something like that. They later steal our photographer/driver for a photo shoot themselves, and wave us away, saying ‘Oh, he’ll just meet up with you later.’ We all shake our heads at this small, but blatant abuse of police power (“Yeh Bharat Hai” or loosely translated in this specific instance to “That’s India for you”), but we ultimately shrug our heads and walk away.

But yet, we start walking back along the beach, taking in the fun of blood-red crabs scurrying around the beach while scouring for shells on the beach. It’s a hoot to see how much my dad enjoys seeing the crabs poke their heads out of their holey homes in the beach. After a while, the driver/photographer gets done with his police photo shoot and drives us back to the main beach entrance.

And yet, the day still isn’t done. I’m flat-out exhausted at this point, not by any great physical exertion, but by all the hours upon hours of driving. We drop off Dad’s friends, aunty and uncle, off at their home, where we have a chance to cleanse our grimy feet and dry off our clothes. Then, it’s another long drive back to Vijayawada, where our relative Lakshmi Aunty has invited us to dine with our family. It wouldn’t be a full Indian day without three different meals at various relatives’ homes. At long last, we make it back home around 10:30 or 11 p.m. and doze off. Sleep has never been more welcome.

P.S. – We’ll be driving back to Hyderabad today and flying out tomorrow for our North India trip! Wi-fi access may be spotty, so I may not post as often. 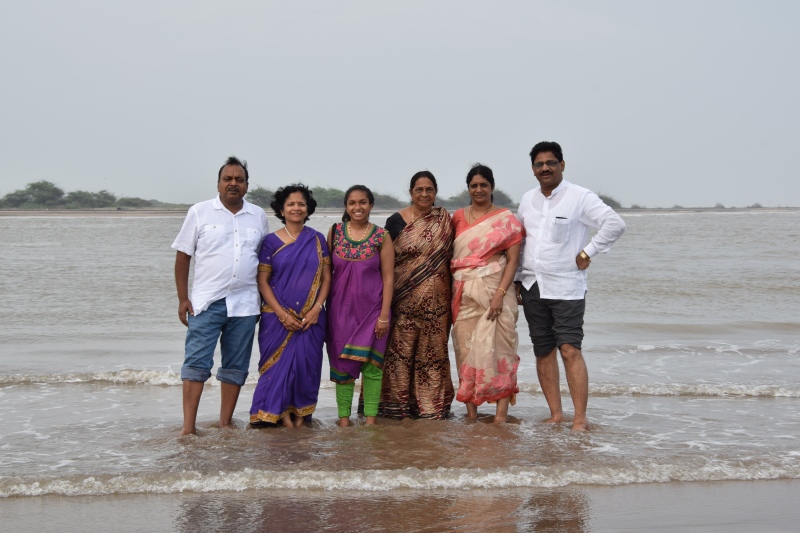 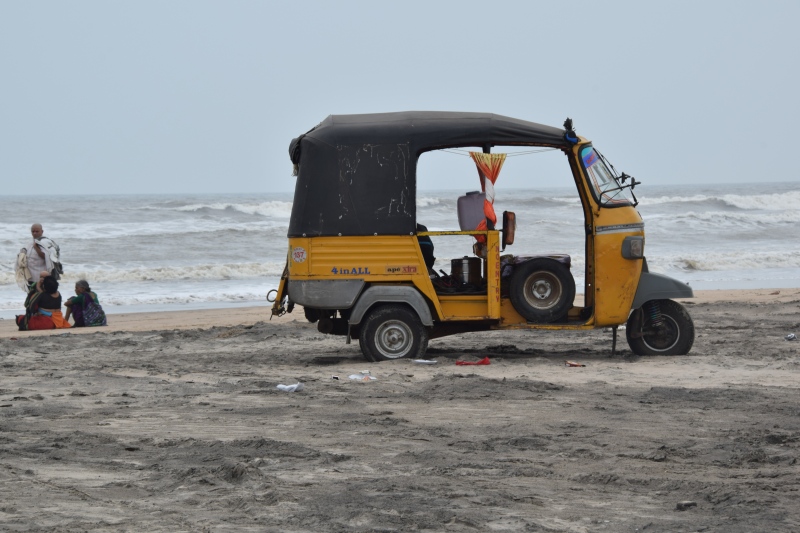